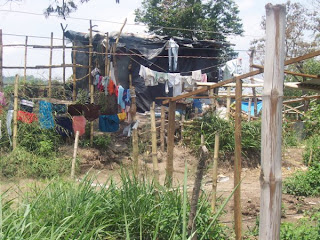 Wednesday the team went back to San Martin (pronounced San Marteen), and visited their friends at the Special Needs home again. They also went to a squatters village. This is where people live that have no where else to go. They move onto land that they don’t own, and someone sets up some pieces of tin to form 4 walls, then someone else comes along and leans their tin or cardboard and trash bags, against the first family’s makeshift home, and then it grows, until it is a large maze of pieces of tin forming rooms where entire families live, with no electricity or running water. This eventually forms a city within a city. The government doesn’t approve of this, but again, these people are homeless, and have nowhere else to go. Our team to rice and beans to families living in one of these squatters camps. They asked the people how they could pray for them. They shared God’s word whever possible.